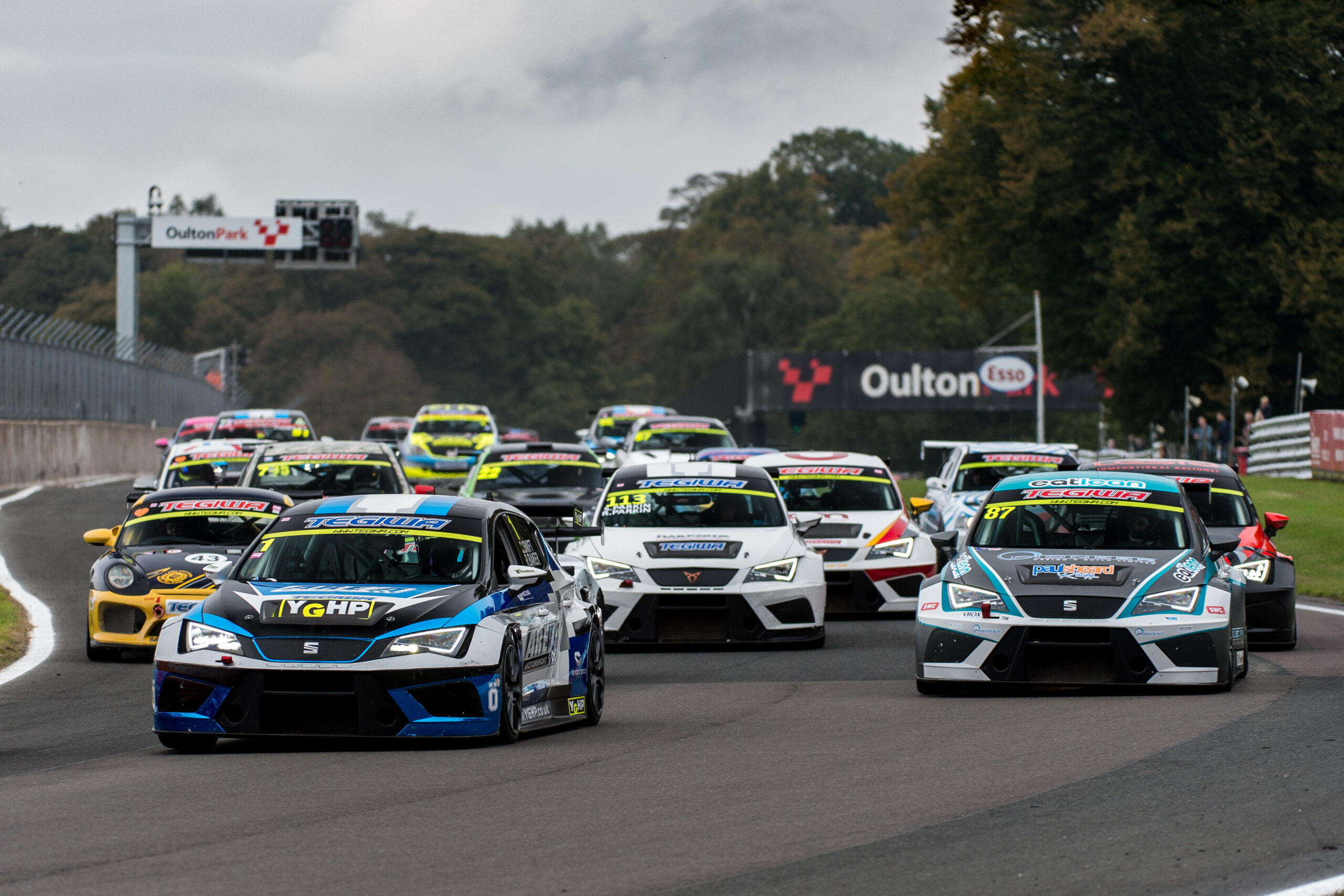 Club Enduro Final Round – 3 x Championships Won with 3 x Trips to the podium!

The final round of Club Enduro would take place at Oulton Park with a huge grid as always and over 45 cars in the 3 respective classes. It would be the most cars we’ve had at any given circuit all year with 8 customer cars taking on the 2 hour 5 minute race.

We’d have some new cars and customers to the Team for this one. Team Darkside’s Ryan and Scott Parkin took to the wheel of our hire Cupra TCR that finished 2nd in the TCR UK Championship this year. Chris Coomer would take on his first race in his TCR Cupra after minimal testing but his home circuit he would hope to perform well. Will Beech and Mark Grice who have raced with the team all year in their MK6 Class B Golf switched to their newly purchased TCR Car that only arrived into the Country 48 hours before the race day!

Usual championship protagonists of Chris Freeman and Andy Baylie would both compete in their K24 Civics in Class B, Jonathan Packer would try his first Club Enduro race of the Season in his Class C Civic after doing roadsports most this year with great results. Luke Handley who was in a 4 way championship battle for Class B honours would be in his MK7 Golf GTI with Rob Baker and Carl Swift in the Area TCR they’ve raced for the past few seasons looking to seal the Class A and overall Championship.

With a positive days testing behind the Team qualifying was early Saturday Morning on a dry but Cold track. Swift would put the Area TCR in P2 in Class A with the Parkin brothers P5 closely followed by Beech/Grice in P6 and Chris Coomer in P13.

Class B would shape up with Luke Handley in P2, Chris Freeman P4 and Andy Baylie in P16 after a puncture early on in qualifying would mean he would start at the back of the grid. Handley needed to finish in the Top 3 realistically to stand a chance of winning the championship.

Class C saw Jonathan Packer line up in P8 with only 8 tenths separating P8 to P2.

The race began at 2pm with a huge grid rolling upto the start the Teams Class A entrants would make a good getaway with Swift and Baker taking the lead by Lap 1 with battling behind between the Parkin Brothers and Grice it was extremely close P2 to P6. A early safety car bunched the field up with Parkin sat now in P2 and Grice sat in P5. Coomer had a spin at the final turn and sadly had to retire the car with damage.

In these early 6 laps it was more like a sprint race with Class B P1 to P4 seperated by a minimal amount of time Handley new what he had to do which was finish behind the Stacey Lotus. He currently sat in P3 with Stacey in P1 and the Hewson Porsche Cayman in P2, the pack closely followed by Chris Freeman in his Civic in P4. Andy Baylie was making good progress from the back through the pack closing in on the front pack of cars.

Jonathan Packer from the off was in a 7 car train for the lead which for the most part wasn’t separated by more than 2 seconds, keeping P1 in sight was his first goal which he was doing well with some pace left in the car to try and attack in the mid stages of the race.

At the restart the order would pretty much remain the same with it still looking like a all out sprint race in all Classes as the Team cars diced for position and tried to move up the order. 42 minutes in a car would pull to the side of the track out of Knickerbrook chicane causing a Safety Car and with the Pit Window open we proceeded to see a flood of cars take advantage by taking their mandatory pit stop. The only car not to stop was the Parkin brothers as they wanted to share the drive time in the TCR car evenly.

The results of the stops would see a heavily bunched up field with the majority taking the stop. The stops went smoothly with great work by the Team servicing all 6 cars efficiently. The only issue in the stop was for Swift and Baker who only managed to get 3ltrs in their car out of the 25 predicted to be required to finish the race. This would become a problem if Baker now in the car wasn’t able to fuel save for the rest of the race.

After everything had settled down it would be Scott Parkin taking the lead having not stopped and everyone else held station with others not stopping we would need to wait to see how it played out once other competitors had also took their mandatory stop.

Everyone battled hard knowing how frenetic it was before the stop there was no time to relax in this race with all drivers pushing as hard as they could whilst the team monitored other competitors positions and lap times for their respective driver.

1 hour and 10 minutes into the race and another Safety car would appear giving anyone who hadn’t stopped the chance to take a safety car stop. This would be when we would be able to tell how everything had played out, most importantly for Luke Handley in his Class B golf who really had to finish 2nd if Stacey was to win this race. Parkin in their TCR elected not to stop again with Scott being more experienced they decided to leave him the car for longer.

With this once again bunching the field up Baker with his fuel saving would hold a 6 second lead to the Grice and Beech TCR for net P1 after the stops with the Heler TCR following close behind and the Casswell TCR not much further back either. Handley would now sit in P2 with the Hewson Cayman in P1 and the Stacey Lotus, the car he needed to beat, sat right on his bumper.

From here forward Handley would have the race of his life, playing to his cars strengths and not letting nerves get the better of him. He continuously defended well until Stacey left the track at Island trying a move round the outside which gave him some breathing space for the time being.

Jonathan Packer had made fantastic progress in his Class C Civic after a great stop by the Team early on he sat in P1 with 3 Class C MX5’s hot behind him with no more than a few seconds separating all four of them.

Scott and Ryan Parkin TCR
From here forward the race settled down in terms of being a green flag race to nearly the end. Parkin although not stopping still was the quickest car on circuit and took the lap record on Lap 49 with a 1:49.56, just 800ths of a second of the all time lap record. A fantastic effort considering they hadn’t sat in the TCR until the morning of the Friday Test. Even with having to take their stop under normal racing conditions to hand over to Ryan for the remaining 25 minutes and a Stop/Go Penalty Scott picked up for a mistake overtaking under yellows they finished the race in P4 which would have been a sure fire podium without the penalty.

Luke Handley VW Golf
Luke Handley after a race long battle in arguably the hardest race he’s had to date did fantastically to hold his nerve throughout the race, do what he needed to do and came across the line in P2 behind the Hewson Cayman to seal the Class B Championship by just 4 points. Back to back championships for Handley who was new to racing just 3 years ago is a great achievement after sealing last years championship by a small margin of just 1 point too!

Baker Swift TCR
Baker and Swift took the Win at the flag and with that the overall and Class A Championship. Early laps by Swift to take the lead and fuel saving by Baker got them across the line with just 3 litres of fuel remaining. Not something they’ll want to attempt again. Never the less that puts them as back to back Class A and Overall Champions.

Grice Beech TCR
Grice had now handed over to Beech mid race who was setting great consistent lap times that would see him retain a net P2 for the majority of the race with the 4 other TCR cars In the race hot on his heels. Unfortunately 15 minutes from the end Beech would suffer a puncture due to sidewall damage dropping him back to a P6 finish. Still a great result for both of them and the car which only entered the country on Wednesday afternoon.

Packer Civic
Jonathan Packer held his nerve to the line with a great solo performance to claim Class C victory by a small margin. It was great to see Jon finally get another decent result in Club Enduro with a brilliant race through the pack and strategy by his engineer.

Freeman Civic
Chris Freeman had great pace for the majority of the race until feeling sick in the car ment he had to end the race with 30 minutes to go. A shame for Chris who got P2 last time out at Silverstone and would of almost certainly finished inside the top 5.

Baylie Civic
Andy Baylie had a race long battle with starting at the back of the grid and finished up in P7. Not a bad result considering the amount of cars in class and the P43 starting position!

That’s our final round of Club Enduro done for this year. I can not thank the Team of people we have enough or the drivers we have the pleasure of working with for making this such a great year with a lot of clashes with other championships it’s been a really tall order and one that everyone has excelled at.

We couldn’t of possibly hoped for or got any better results and it’s all down to our brilliant team and drivers.

A Massive thank you to our Sponors YGHP https://www.yghp.co.uk/ and Jonathan Elsey for the Photos

Images from the Weekend

Leave your thought Click here to cancel the reply